Yes, it is me Gaius Julius. I return from the (fictional) dead for a special World Cup report, after much pleading by the human blogger, Lucianne Poole.

Naturally, you are eager for an explanation as to my lengthy silence. I will only say it is related to the recent resurgence of 80s fashion.

Furthermore, I am no longer vampire baby. I am now ex-vampire baby and most currently a vampire adolescent. I will explain: I am experiencing the equivalent of what you call in human terms, puberty. My tricycle, monopoly-playing and trampolining days are over.

I have entered a new chapter in my fictional life, which involves the following. (I am going to use bullets):
This brings me to the World Cup. Uruguay's Luis Suarez was banned for four months for taking a nibble out of the Italian soccer player Giorgio Chiellini during the June 24 match, which Uruguay won 1-0.

At first, Suarez valiantly defended himself and denied the bite. Since then, Mr. Suarez, apologized to Chiellini. I applaud Mr. Suarez for taking responsibility, however, isn't it time to come out of the coffin and be counted as a [deleted]? My lawyer edited this blog.

This is the end of my post.
Posted by Lucianne Poole at 08:20 No comments:

Yes, I am back. The human blogger Lucianne Poole "felt it was a propos" for me to write the Halloween edition. As this is a human celebration, I naturally refused: hence the non-Halloween edition.

Please note that I am using numbered bullets.

1. Madame Desfarges was fired from her job as a greeter. Screams of "Off with your heads!" in a heavy French accent apparently did not delight the shoppers where she worked as a greeter.

2. I have hired Madame to help me search for my birth mother. As I do not have money to pay her, Madame said she would accept headless dolls in lieu of payment. My lawyer advised me not to ask her why.

3. While looking for said headless dolls in the park, I met Doug who offered to read my tarot cards. Doug is an unemployed fisherman from Newfoundland who has a sideline in tarot card reading.

4. Doug immediately identified me as undead but he said he is not fussy and that he is a fan of Twilight and that he would give me a free reading.

6. Meanwhile, Madame agreed to go trick or treating with me. Of course, we will dress up. I will go as a zombie Canadian Prime Minister Stephen Harper (suit, tie. grey men's wig and no makeup).

7. I am feeling strangely affectionate towards humans these days. It could be because my Facebook following has grown to 2 million. (This is a fictional Facebook page so do not bother trying to find it.)

The human blogger, Lucianne Poole, has asked me to continue with my posts. Apparently, millions of readers follow my posts avidly, so I graciously agreed to prop up her feeble human blog for a bit longer. (She has also promised me a role in her next novel).

Free at last
I thank the thousands of you who signed my petition to release me from the clutches of my fictional jailer, Madame Defarge. (FYI my petition was fictional, which explains why you will never find any names.)

Thankfully, my foster mom, T. Rex, was persuaded that I did not need said babysitter, and she got Madame a job as a greeter at a chain store.

Silver linings
Once freed, I naturally turned to a project that was occupying my thoughts while I was in the "slammer". You will never guess, human reader, what this project is so I will tell you. I was inspired by Madame's favourite TV show, Who do you think you are, to track down my birth mother.

Of course, I assume my birth mother is a) a world-champion trampoliner b) an outstanding Monopoly player.

Obstacles
So I jumped on my tricycle (my faithful cat Gengis Khan at my side) and raced up and down the sidewalk on Las Olas Boulevard. I asked everyone whom we  hit/knocked down if they knew my mother.

All I got was:
Not a cry for help
If you have ever searched for your vampire mother after she abandoned you on a beach, please share your advice and lessons learned. I eagerly await your reply.

This is the end of my blog.
Posted by Lucianne Poole at 07:14 No comments: 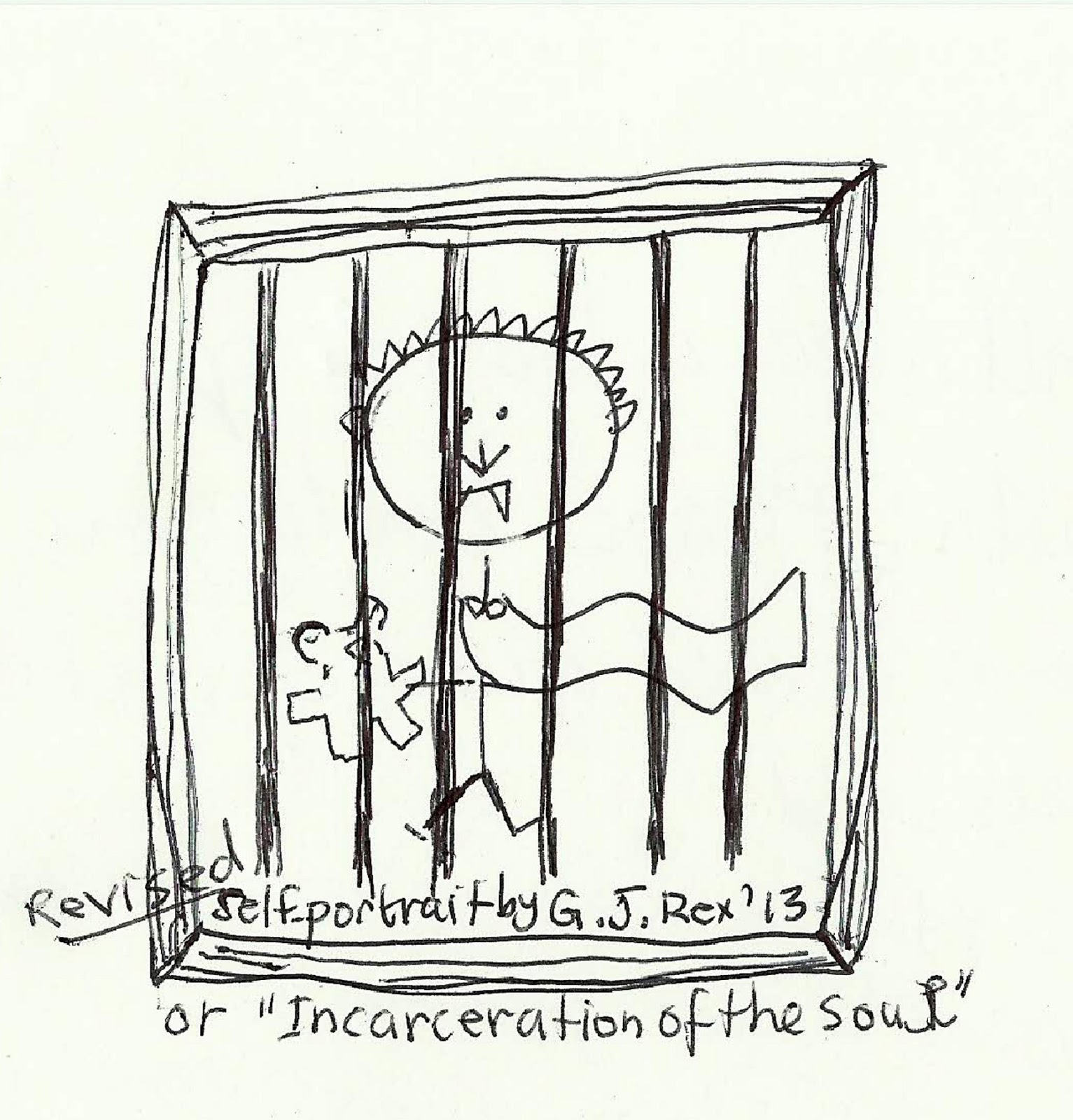 The human blogger, Lucianne Poole, asked me to guest blog for her for the rest of the summer. It's not clear why she needs time off, except for the usual feeble human excuse of summer vacation.

I was going to write something earlier but I have been "jailed".

This is due to a misunderstanding of the nature of Independence Day (aka Fourth of July) celebrations, specifically the "firework" displays in my neighbourhood of Fort Lauderdale. I was unfamiliar with the sounds of destruction that accompany this holiday. I mistook screams of delight for those of terror.

Unfortunately, these sounds triggered a instinctive reaction in me that was unforeseen by my foster parents and Nate, the human with whom I was playing Monopoly at that specific time.

Since then, my foster mother, Theodora Rex (aka T. Rex) banned me from playing Monopoly and has engaged a fictional sitter called Madame Defarge. She speaks only French (no, not even Latin or ancient Greek), knits incessantly and cackles at inappropriate times (such as when I complete a New York Times crossword puzzle: my new hobby).

Mme Defarge also trims my talons, I mean finger nails, too short so they no longer make interesting clicky sounds. Her only redeeming quality is that she lets my cat, Gengis Khan, relieve himself on my parents priceless Persian carpet.

T. Rex has sent me for baby massage therapy to calm my "murderous impulses". I strenuously resist but Mme Defarge has an iron grip like T. Rex. She pummels me with such sledge hammer-like force that I am reluctantly lulled to sleep.

In effect, she has become my jailer, so I thought I would use this blog to start a petition to free me (There are currently no websites for fictional petitions).

Please leave your name in the comment below and also indicate if you are interested in playing a fictional game of Monopoly when I am declared no longer "life-threatening".

This is the end of my blog.
Posted by Lucianne Poole at 12:12 No comments:

My name is Gaius Julius Rex and this is my first blog ever. (I taught myself to read and write shortly after my fictional birth in April.) (I am not lying.)

I had intended to provide a treatise on the early Greek roots of rhetoric, but the human blogger Lucianne Poole insisted on something short and journalistic. I am unfamiliar with this style of writing, having started my education with the classics. The human has proposed a "question and answer" format. I have reluctantly agreed and hereby present a series of questions and answers:

2) What part of a chocolate Easter bunny do you eat first?
The head.

4) Do you drink blood?
My lawyer has advised me not to answer this question.

5) What do you do for fun?
When I'm not playing Monopoly and trampolining, I ride up and down Las Olas Boulevard (in my hometown of Fort Lauderdale) on my tricycle looking for Monopoly players and professional trampoliners. My foster mother, aka Theodora Rex, aka T. Rex, says this is unsavoury. I asked her what "unsavoury" meant. She said sleazy. I asked her what "sleazy" meant, but she did not reply.

6) What do you want to be when you grow up?
a) professional Monopoly player
b) the first to trampoline to the moon (this means building a special trampoline to catapult me into space)

This is the end of my blog.

The human, Lucianne Poole, advised me to invite comments and questions, but I'm not sure how this works or if I really want to do this.
Posted by Lucianne Poole at 11:15 3 comments:

By Lucianne Poole
﻿﻿
"I'd like to set the record straight," declared vampire baby in his first wide-ranging interview, which he would only grant on the condition that I, who gave him fictional life, play a game of Monopoly (U.K. version) with him.

The newborn became a local cause célèbre after being found on a Fort Lauderdale beach following a Vampire spring break.

"I mean, I'm no different to any other kid," confided the six-week-old who looks more like a four-year-old. "I eat, sleep, speak several languages and trampoline with world champions. I don't know why reporters are lined up at my foster parents' door," he complained while gnawing on the custom-made marble game pieces.

"Apart from the ridiculous name I've been given, I'm perfectly normal. But seriously, who calls their son Gaius Julius?"

Vampire baby paused to swig from a bottle containing an unidentified red fluid, and then asked me what I thought of the name Jay.

"Don't get me wrong. My foster parents, Tiny [Justinian Rex] and T. Rex [Theodora Rex], have been great. They even sent home to the family crypt in Italy for my very own child-sized sarcophagus. I have to say, though, T. Rex has this crazy grip like a WWE wrestler."

The interview took a slight downturn when I bought up the two most expensive Monopoly properties. Gaius Julius' face turned a violent shade of purple and his eyes took on a murderous light.

He pounced, razor-sharp teeth bared. Fortunately, a long-fingered elegant hand clamped around his throat before he could reach me.

Neither of us argued with her.


Any questions for vampire baby? Leave them here. He is mildly curious about humans and may condescend to answer them (or not). I apologise in advance for his bad manners.
Posted by Lucianne Poole at 06:46 2 comments: 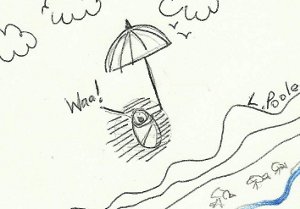 Just as I predicted, a holiday romance flourished and died while my fictional characters were on spring break. A beautiful, albeit monster, baby was born and abandoned on the beach by its flighty parents.

Fortunately, a childless retired couple fostered the vampire baby. The kindly Italians, who retired a few years ago to Fort Lauderdale, persuaded the community that they could manage the baby's voracious needs (authorities were reluctant to link a number of animal corpses on the beach to the baby's presence).

The foster parents are Justinian and Theodora Rex (affectionately known as Tiny and T. Rex). They are partial to mosaics and mini golf. Tiny is on the local hospital's board of directors, while T. Rex runs a few children's charities.

On a happy note, the baby (after a single month of gestation) is now learning Mandarin and Arabic (he thrives on challenge) and is taking trampolining classes (he likes to bounce).

Feel free to leave any advice to the adoptive parents of a vampire baby.

Meanwhile, future postings will be rather randomly scheduled (eg. once per month perhaps) due to the self-appointed monitoring involved in fictional fosterings. Thanks for your understanding.
Posted by Lucianne Poole at 16:15 2 comments:

Followers of The Wading Poole